How to Overcome Stage Fright

The secret to stopping your hands from shaking, your heart from exploding, and giving better performances

So here I am, standing in front of the audience with my cards. “Pick a card,” I said as I moved the cards to the girl standing in front of me. “This audience isn’t one of my largest, there’s only about ten people here,” I thought.
Though I must admit, I’m feeling a bit nervous. I mean, I might have said “pick a card” just fine but maybe I should’ve said something else? Oh wait, she’s done looking at it. Okay, now just to have her put it back in the deck. Just let me reach out…..wait?!?! Why are my hands shaking?
That’s okay, I’ll just hold the deck with two hands.
Well, that looks a little ridiculous…..


Okay now time to control the card, just perform a false shuffle……..D*** (oops sorry). Ah, I can’t believe I just flashed that…..stupid shaking hands…. if I could only just finish then…..ah S*** (pardon my french) I flashed again…. sigh, maybe I should just move on with something else…...

We’ve all had it happen, we go to perform and just get hit by a rush of fear and nervousness.

Your heart starts pounding, your hands start shaking, and you seem to lose focus on what you were doing.

Needless to say this can cause grave mistakes in performance and can become rather embarrassing.

Well, it’s time to stop all of that craziness and really get your performances better.

Getting Over Stage Fright:

The sad news, there is no hard and fast cure to stage fright. Even professional performers feel the nervousness before performances.

John Lennon, who performed in front of live audiences thousands of times, was known to throw-up before each performance.

However, you don’t need to let that nervousness control you.

That’s all it takes. Stage fright always takes place at the beginning of a performance. Though John Lennon would throw-up before a performance, he never did during one (to my knowledge at least). Getting started is the hardest part. After that, your preparation and practice will take over.

You’re Going to Feel Something…

If you already have that nervousness, then it’s probably never going to go away. at the start of a performance. No matter how much you practice, prepare, get used to doing your routine, there will be that element of fear at the beginning. I’ve done the same card tricks for the past ten years and I still feel nervous before performing.
That’s where nailing the beginning comes in. When researching this report, I got in contact with Michael Ammar who was ever so gracious in giving me some advise on the subject. I asked him how he overcomes stage fright, and how to help new magicians deal with it. Here’s his answer:

Arriving at a place where you understand what's going on and what the best ways of dealing with it will be for you, can be a bit of a process.
One thing you'll learn is those fluttery feelings always go away after the first few moments. You eventually hit your stride, you realize they aren't going to kill you, and you start to assimilate the adrenaline into a euphoric energy.
With experience, you'll be able to walk out with that energy working for you, instead of making you consider running away, because you understand what's going on.
You realize those first few moments have to be so completely secure in your mind, and so totally memorized and internalized, that you don't even have to think about them as you're doing them. That's important. Because if what you're doing is relegated to the automatic part of the brain, that part of the brain works 4 times as quick as the 'I'm thinking about what I'm doing and saying' part of the brain. So those first things should be so automatic you can actually be in the moment, instead of thinking about what you're doing.
Also, don't select something that requires people to watch closely while your hands do something intricate. Anyone's hands would shake at those times, so pick something that plays bigger so those little trembles won't be noticed.
After you’ve [become] more comfortable, you can do those things. But if you do that at the very beginning, you're just asking people to look very closely at hands that will be shaking a bit. And that'll catch a shadow on everything else that follows, even though you'll have calmed down by then.

Anyway, that's part of the big picture as I see it. Hope that helps!

In other words: NAIL THE START

As I think back to all the times I’ve had “the shakes” they all happened at the beginning of my routine, especially when I was performing a sleight that I wasn’t to sure of.

In the third paragraph He commented about not starting with something hard, or intricate. The important thing is nailing the beginning because as you continue you'll fall into the groove and won't worry about those feelings anymore.

It’s simple, it’s easy, and it just works great. Doing something that requires ZERO sleight of hand will allow you to not worry about messing anything up, or flash a move.

Self-Working magic doesn’t require any sleight of hand or action on the part of the magician to work. Sometimes there is a set-up that occurs, like stacking the deck, or a fool-proof method that allows you to simply talk and watch the routine unfold, like that hideous “count out seven cards trick” I can’t even remember the name of it, but it will not be covered here.

With these types of effects only memorization of the steps is needed. 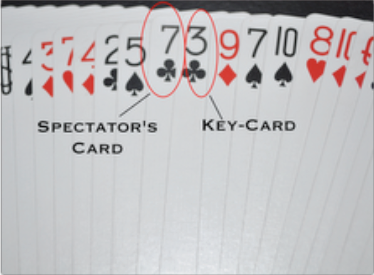 A wonderful effect you can do with this is a “stop” effect.

I hope this helps you in becoming a better and more comfortable performer.

Like I said before, I have more routines and effects for you described in video just head on over to this link and put in your email address.

Over there I’ve got:

I would also like to thank Michael Ammar for being absolutely wonderful and taking time out of his day to answer my question.

Be sure to head over to his Facebook page and “like” him! He is a fabulous and amazing magician, well worth following.

We have 256 guests and no members online